Nitin
Editor
posted on 3 months ago — updated on 2 months ago
814
views
Being the biggest tech giants of the modern world, people have come to a question of how Google recruits its developers and tech minds from all around the world.

People have been always curious about the same and wanted to know the procedure of how the Tech giant recruits its brightest minds.

Among one of the best-known controversies of Google stands the great Google Foobar Challenge, for many thought it was just a myth but, since the last few years, many cases and people have upfront confirming that Google has been hiring the new geniuses using the Google Foobar challenge.

The idea and process behind how the perfect candidates are chosen have remained a complete mystery as well.

Being able to have this challenge and also becoming a part of a company like Google has always been the definition of a dream job for many.

So today we discuss what is Google Foobar, the process, and the tips and tricks of the trade.

What is Google Foobar?

Google Foobar is an online challenge being conducted by Google to recruit the best developers from all around the world.

The Google Foobar challenge as many like to refer to it a comprises several layers and levels through which the best candidate is chosen.

Many believe that such processes make the recruitment process easier and also more challenging as the person has to do the hard work of coding, and maybe debugging a given set of code to complete all the levels of the game and become the winner, and here the stakes are as high as you can imagine as the winner here gets to work with the tech giant Google itself.

As you now know about the Google Foobar challenge, let's see when and how it started.

Google Foobar Challenge which is also called “Foo.ba”, was started around 5 years back in 2014. It was started as a secret hiring process for developers and programmers present worldwide.

But in this challenge, not everyone can take part as the invitation for this foobar challenge is sent by Google itself based on what people search over the Internet.

Google Foobar Challenge is a program running on one of the “sandbox” available for Google's secret programs, events, labs, etc. which don't need to follow the same branding guidelines as the google.com domain follows. The name of the “sandbox” on which Foo.ba launches is “withgoogle.com”.

Now, many may think why using Google Foobar and not conventional Interview methods?

The answer to the question of why Google Foobar can have many folds from cost, to better reach to even better testing quality.

So we will try to answer these questions as to why in the world does Google use Google Foobar?

Cost-Effectiveness of the procedure:

Being Google it is not too far to think that this tech giant will always want to be better with the cost-effectiveness of the company maybe from the marketing point of view or the other aspects of the company.

Hence using the Google Foobar challenge allows the company to reduce the cost over the procedure to conduct interviews and calls for the job thus making it more beneficial for the company.

Thus reducing costs on such activities allows them to invest more money in the research and development section of the company.

Being able to conduct online recruitment tests and grading helps the company to reach more mass of people all around the world as the online test allows the tests to be conducted according to local time and sometimes even availability of the contender.

These allow them to increase the scale of reach of the more and more talented individuals out there.

With the increase in technological knowledge companies always looks for the best minds they can hire. However, it is always tough to rectify and sort the users among the group of many in just a 15 minutes interview, so many companies have come up with many techniques to find the one best candidate.

The same way Google has come up with the Google Foobar Challenge. Here people are tested based on the type of results the candidate has got on the tests and hence gain the opportunity to gain a job in Google.

Now looking at how this procedure helps Google you may also have come up with the idea to test out how good you stand on the pedestal and want to try the challenge for yourself too.

Where and How does the Foobar Work?

Since this process is one of the most mysterious ways of recruitment from Google, the criteria of selection have always been in the questions, the process, and cutoffs but as always mysteries are followed by theories and hence in the same way we have the theories about the selection of the candidates and the way it is managed.

Many people who have been part of the Google Foobar challenge have mentioned how their search results may have been the cause of them being selected by Google for this program.

As it is very evident that being the most used search engine worldwide we have come across the point many times that Google keeps a track of your search history.

Based on such history google is able to determine the ability of a programmer and may approach the developer or as many like refer programmers using the popup ads and messages on their web browser.

Many times it has also been noted that the developer may be approached through email.

These have happened to many high-end developers and hence reduce the probability of the same with any unpopular or average programmers.

But being the scenario it is always advisable for you to check your email regularly if you are a very hardcore programmer.

This point is still a very topic for discussion where some of the participants have also mentioned that the option to accept the challenge has been discovered while they were inspecting the pages on their browser.

Since the internet is the ocean of websites, it is very difficult to find the site where the challenge has been secretly guarded in the inspection elements of the page.

Even though it is the rarest of rare cases, you can always try your level best.

Since we have discussed how the picking of the candidates is done now we may question how to get it?

Let’s answer this question as well.

How can you get into the challenge?

From the above points, you have got the point that the selection process for the Google Foobar Challenges is very tough and not everyone can get into it, like a normal interview process.

Now you can be invited using any of the above-listed methods and hence gain access to the challenge if you dare to accept it.

Now the online challenge has 5 levels with the level of difficulty increases exponentially with every next level.

Now when talking about the coding language used in the challenge mainly there are only two languages Java and Python.

Now talking about the number of questions we have 1,2,3 questions on the first second and third level were as two questions in the fourth level and 1 in the fifth level.

When these messages come up to take the challenges, you get three options with the message which is mainly I want to play, No thanks, Don’t show me this again.

Now opening the option to play if you accept to take the challenge, you would be provided with two solutions named solution.java and solution.py, now based on your preferred language you can choose any solution file of your choice.

Now the main change you need to make is the change in the name of the file using the command edit name and rename the file.

How to give the Foobar test again?

The second method is also sending the referral to yourself using another account.

Using the invitation method can be very useful to send the request to friends and your own self so as to maintain the grip on the test, you can also have the function of sending the invite in your favor and makes the best out of it, you can understand the test in the first attempt and then try taking again in the upcoming attempts, getting to attempt the test more than once increases the chances of cracking the test and making into the google.

As soon as the third level of the game is completed the Challenge will prompt to give you all the contact details for recruitment purposes and if you are the lucky one you may even get a job in Google. 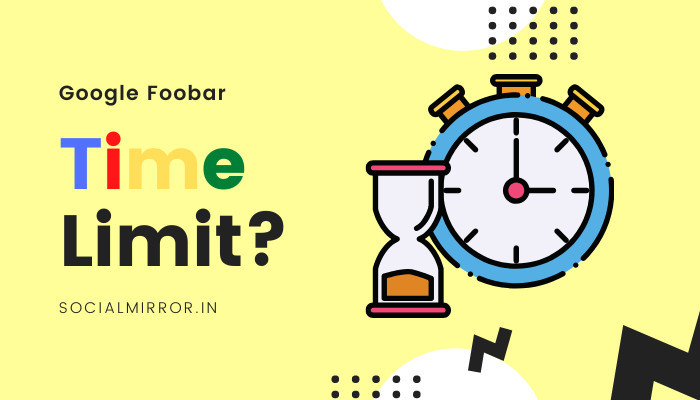 As soon as the play button is pressed your time limit starts, now the limit can vary based on the type of challenge you have.

The time limit may vary from 2 days to 21 days and hence you can have the time to complete the challenge.

Now the waiting period between two challenges is very uncertain and hence many people try to end the challenge as soon as possible.

But be careful before beginning the test.

Being precautious will be better than being aggressive as the famous story says slow and steady wins the race, be in a hurry to complete it in the given time, and not the fastest.

And trying to execute the program and optimize its latter as a runnable program is better than the non-running optimized program.

Advice about the Google Foobar Challenge

Since Google Foobar is a very pristine challenge and getting a job at Google is at stake hence you have to be very very careful before taking the challenge, so before beginning the test ask yourself about can you take the test.

Since you have got the option for taking the Google Foobar challenge then you are great at what you do and will definitely get the chance again but failing to pass the test may end all the chances.

Since the challenge is completely based on coding skills you will have to give an interview and crack it.

Based on your abilities, experience, and also your personality the kind of job provided may vary.

Hence this challenge does not guarantee any fixed position in the organization hence it is advised that you also grow your communication or soft skills to get a better position not only in Google but in any organization that you may join.

Google has been trying to recruit great developers from various parts of the world and has come across several methods and techniques to find the best minds and geniuses in the field.

Google Foobar is the main player that comes here in the play, a special challenge specifically tailored for the sole purpose of finding the best programmers of the game.

It's a 5 level coding challenge with the benefits of gaining a job at Google with a very good post and designation if you choose to accept it and complete it in a given time frame.

It mainly frames around Java and Python as the main programming language. The main mission is to complete the challenge with the point of passing all the provided test cases. You can brush up your skills by taking coding challenges on websites like HackerRank, CoderByte, HackerEarth and many are there.

The challenge also provides the option to send referrals at levels two and four, which can be used to refer a friend or be used as a second lifeline for the challenge.

Now looking for this challenge is quite tough and requires good coding skill, but is a life changer.

All the best becoming the next Google genius.

If you want to read more such interesting and knowledgeable articles please check out SocialMirror.