
Copyright © 2023 SocialMirror. All rights reserved.

What is Telegram? How It is doing Best in Business in 2022?
Social Media

What is Telegram? How It is doing Best in Business in 2022?

Nitin
Editor
posted on 8 months ago
599
views
As the internet has become the most outreached in the modern world, the point of connecting and socializing with friends and family has become even more important than ever before and with the Apps like WhatsApp many players don't even come close one such app is the Telegram, the most common question asked is What is Telegram?

As the internet was growing in the initial days, it was just a means of communication for the army and not meant for the common people, however nowadays anybody with a smartphone and an active connection can have the access to the internet.

Among these came some of the major game-changers when we talk about the messaging applications, Whatsapp has however taken the throne here and however many worthy Apps have been sidelined in this process on of them is "Telegram".

With the popularity of Whatsapp, much messaging application popped up, planning to make it big like that of Whatapp and grab the market but all the same features and many tries to replicate the same features, thus not providing any of the new products to excite the masses and hence many never even saw the light of the day.

Also in this race were some of the great applications that had the potential to grow and make it, but the reputation of the other application presided in the people's mind and hence made them sidelined, one of them is Telegram.

Many people don't know what is Telegram? and we have the answer to this question.

Telegram is Cloud Based multi-platform communication Software that has been gaining popularity like Whatsapp for the last couple of years with around 400 million active monthly users on 24th April 2020, which is very similar to Whatsapp in the core. Telegram application brings many new features that made it come out as one of the major contenders of the game.

Being a Cloud-Based platform makes the application much faster than you would imagine as all the major processing done over the cloud and hence made the best out of the modern technology being developed in cloud computing.

The application has seen a fair share of changes in the last few years where it has got some major changes that even increase its potential over big players and also have made them a better marketplace for many business owners throughout the time.

What is Telegram's Origin?

The Telegram app was been developed and launched in the year 2013 by two brothers named Nikolai and Pavel Durov. The application was developed and run in Russia in the initial days and slowly made its way to Germany and slowly made the mark the whole world, there are many new tech aspects it brought with it that made the application one of the best.

Among the two brothers, Nikolai made the MTProto Protocol over which the application runs, and then later funded by Pavel they made a great digitally private messaging application.

What are Telegram's features that make it so special? 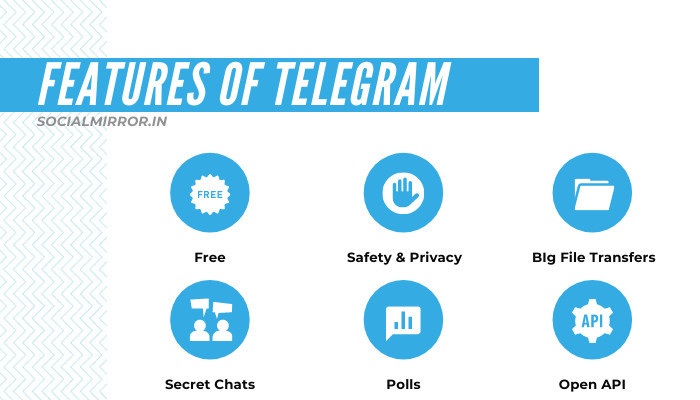 Some of the features that Telegram provides are very unique to itself, which makes this application such a special one among the rest.

The Telegram app runs on a very special protocol developed by the co-founder Nikolai Durov and the team at the Telegram based on 56-bit symmetric AES encryption, 2048-bit RSA encryption, and Diffie–Hellman key exchange.

This makes Telegram one of the safest messaging platform to use and also allows the user to feel free.

The Telegram app is free for life and has no advertisements making the application hassle-free and easy to use without any worries of disruption or the tensions having unwanted or inappropriate advertisements been thrown on your face.

Being a cloud-based protocol allows the application to be accessed seamlessly over multiple platforms with complete sync anywhere all around the world, with the best speeds available.

Telegram company has made its API open source and available to anyone and everyone for making the best use out of thus helping the other budding programmers and developers to use the API to the full potential.

One of the best features of the application is that the application does not have a size limit over the big file sent over the chat making the place for sharing media over a chat platform and another benefit is that it supports all the native file formats, thus allowing the job of file sharing much easier than compared to other applications.

Telegram also allows third-party developers to make bots that may reply, record, or send pre-programmed messages to the user making a plus one feature for the business owners in general.

In recent times Telegram has also introduced a new feature named the secret chat that allows the users to have a secret chat that is not stored and is automatically destroyed after 24 hours thus having maximum privacy.

They have also introduced the feature of having polls in the chat that allows being a great feature in the group chats making the feature to be more interactive, thus helping to connect the people on a closer level.

Now we have answered the question What is Telegram?

It is a Cloud-based Application that allows the users to chat over the internet allowing them to have some features that the other big applications do not provide.

It was developed by two brothers in Russia slowly making it through Germany now it has gained quite some reputation all over the world specially by the business community.

To read more interesting articles like this, check them out at SocialMirror. If you have any queries or doubts, feel free to ask me in the comments section below!